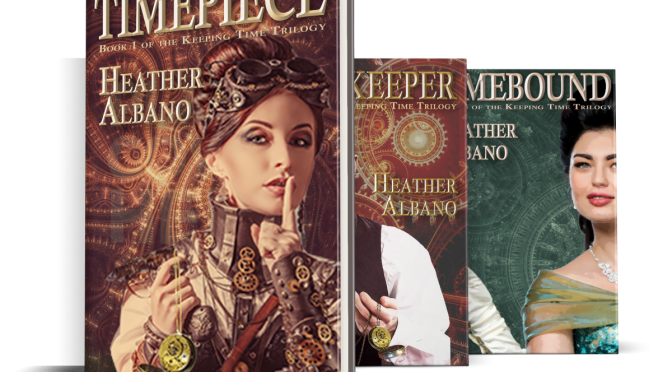 Hey! A couple of pieces of news! First of all, I recently wrote a post for Joseph Campbell Foundation (my “day gig”) entitled “Where Do Stories Come From.” It’s talking about the source of narrative, and also mythologist Joseph Campbell’s own fiction writing. Check it out! Also, the final volume of my friend Heather Albano’s steampunk time travel trilogy Keeping Time is coming  out on November 22! Timebound is a wild, roller coaster-ride of a conclusion to what was already a fun series — a mashup of HG Wells, Jane Austen, and Mary Shelley, if you can believe it.

In preparation for the release of the conclusion of the trilogy, we’re lowering the price for the ebook of Timepiece, the first book in the series, to just $0.99! Just November 22, though, so don’t wait!

You only THINK you know
what happened at Waterloo.

“Waterloo and time travel are made for each other and Heather Albano has done a wonderful job of giving us a delightful cast of characters, tasked with stitching together the proper nineteenth century while fending off several monstrous alternatives. Propulsive adventure with historical insight.” – Kim Stanley Robinson, Red Mars and 2312

It’s 1815, and Wellington’s badly-outnumbered army stares across the field of Waterloo at Napoleon’s forces. Desperate to hold until reinforcements arrive, Wellington calls upon a race of monsters created by a mad Genevese scientist 25 years before.

It’s 1815, and a discontented young lady sitting in a rose garden receives a mysterious gift: a pocket watch that, when opened, displays scenes from all eras of history. Past…and future.

It’s 1885, and a small band of resistance fighters are resorting to increasingly extreme methods in their efforts to overthrow a steampunk Empire whose clockwork gears are slick with its subjects’ blood.

Are these events connected?

Oh, come now. That would be telling.

READ THE EXCITING PROLOGUE TO TIMEPIECE (#1) It is easy to invest in the characters, and once the reader starts this book, it’s almost impossible to put it down. Risuko goes through a lot of character growth throughout the book. An entertaining story with excellent writing and haunting descriptions, a relatable heroine, and fast-paced writing.

David Kudler is an expert provider of publishing services and consultant to independent and self-publishers. An author himself, he lives just north of the Golden Gate Bridge with his wife, actor/teacher/author Maura Vaughn, and their author-to-be daughters. And their (apparently) non-literary cat. He serves as publisher for Stillpoint Digital Press. Since 1999, he has overseen the publications program of the Joseph Campbell Foundation, for which he has edited three posthumous volumes of Campbell's previously unpublished work (Pathways to Bliss, Myths of Light and Sake & Satori) and managed the publication of over fifty print, ebook, print, audio, and video titles, including the third edition of the seminal Hero with a Thousand Faces. He is honored to serve as the president for the Bay Area Independent Publisher's Association (BAIPA). A published author, he recently released Risuko: A Kunoichi Tale, a young-adult historical adventure novel set in sixteenth century Japan.