Happy Year of the Monkey! Not only is it a chance to celebrate the traditional beginning of the new year (Japan switched to the Western calendar in the 19th century), but it’s a chance to share a new review of Risuko:

I’m here to tell you: read this. You won’t regret it. The story is filled with character tension and growth, intrigue, and immersion in a Japanese world that feels incredibly authentic. — Kate, Hounds & Habits

Risuko by David Kudler is my first ARC and I absolutely loved the main character and story. Being an ARC, however, it needs a little tough love before it reaches its full potential.

Let’s get the bad stuff out of the way first.

The first thing anyone will notice about Risuko is the killer cover. I actually fell in love with the cover alone; this book barely needed a summary & hook to get me reading at all! (It was designed by James T. Egan of Bookfly Designs, if you’re wondering.) Brace yourself, then, to see the back cover. It’s awkward and cheap and broke my cover-loving heart. 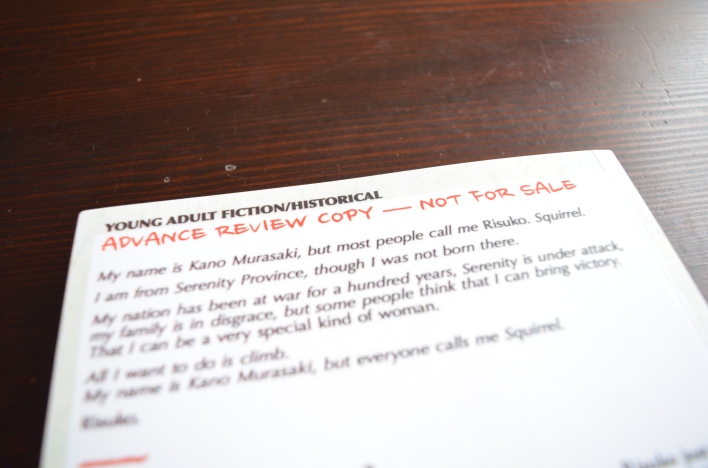 It was hard to snap a photo that did the back justice without overdoing it, so you may have to take my word on this one. Imagine the author typing up the summary in a word document. Now print it out and paste it on the back of a paperback. It’s a weird, semi-transparent white block that only looks natural on the bottom half of the book, because that’s the only place where there’s anything in the background. Fingers crossed this is just because it’s the unfinished version. Whether it’s the amazing 10/10 of a front cover dragging down the back cover or it’s actually as bad as I think it is, I’m disappointed all the same.

Risuko is almost a diamond in the rough. It is so close to being a five star novel it hurts. It’s the sentences that snap you out of the story because they’re so awkward to stumble over. It’s reusing the same phrase three times in the first quarter of the book, and it wasn’t very good the first time around. (How many times can you physically do something without knowing you’re doing it?) It’s giving away the twist just a few sentences too early that doesn’t give the intended dramatic effect.

Now for the good news

Aesthetic lovers who noticed the cover before anything else will be pleased to know the styling doesn’t end when you open the page. The Japanese-inspired font graces every title page and there are even Japanese characters on the dedication page. More interesting, to me, was the use of discretionary ligaturesconnecting the “ct” and “st”s throughout. They reflect the story’s historical setting in 1570 AD, when it would’ve been cheaper for a scribe to take up less space on paper and have to lift his pen less frequently to save time.

Even the shape of the book felt more Japanese as it’s taller and skinnier, reminiscent of manga.

The story itself was perfect. By the end of chapter one, I was already invested in the main character, Risuko, and itching to turn pages. I ended up finishing the novel at 5 am because I couldn’t stop! This is a refreshing change from YA books that seem to lull until the midway point.

It should be noted, however, that despite the genre, Risuko isn’t a teenager, not even for her time. It’s explicitly stated that she’s hanging out with older “children” and that she hasn’t had her “moon time” yet. This gives the sequels an opportunity to watch her grow older. It does have the tendency to leave the first novel feeling middle grade with a few adult jokes thrown in, Disney style.

If you’re sitting on the fence about this one, I’m here to tell you: read this. You won’t regret it. The story is filled with character tension and growth, intrigue, and immersion in a Japanese world that feels incredibly authentic.

With more than four months before publication, there’s plenty of time to fix up some awkward lines. Realistically, it’s unlikely that I’ll get my every wish, so I’m giving Risuko 4.5 stars in good faith that enough will be tidied up to make this novel everything it should be. I will 100% be watching for the sequel! In the meantime, keep your eyes peeled for Risuko’s big debut on 15 June, 2016.

Can one girl win a war?

My name is Kano Murasaki, but most people call me Risuko. Squirrel.

I am from Serenity Province, though I was not born there.

My nation has been at war for a hundred years, Serenity is under attack, my family is in disgrace, but some people think that I can bring victory. That I can be a very special kind of woman.

All I want to do is climb.

My name is Kano Murasaki, but everyone calls me Squirrel.

One thought on “Risuko Review: “Read this. You won’t regret it.””

Bright Eyes Review:
The martial arts was well done, the mystery was riveting, and the ending unexpected!

David Kudler is an expert provider of publishing services and consultant to independent and self-publishers. An author himself, he lives just north of the Golden Gate Bridge with his wife, actor/teacher/author Maura Vaughn, and their author-to-be daughters. And their (apparently) non-literary cat. He serves as publisher for Stillpoint Digital Press. Since 1999, he has overseen the publications program of the Joseph Campbell Foundation, for which he has edited three posthumous volumes of Campbell's previously unpublished work (Pathways to Bliss, Myths of Light and Sake & Satori) and managed the publication of over fifty print, ebook, print, audio, and video titles, including the third edition of the seminal Hero with a Thousand Faces. A published author, he recently released Risuko and Bright Eyes, the first two books in a young-adult historical adventure series set in sixteenth century Japan. He is hard at work on Kano, the third book.