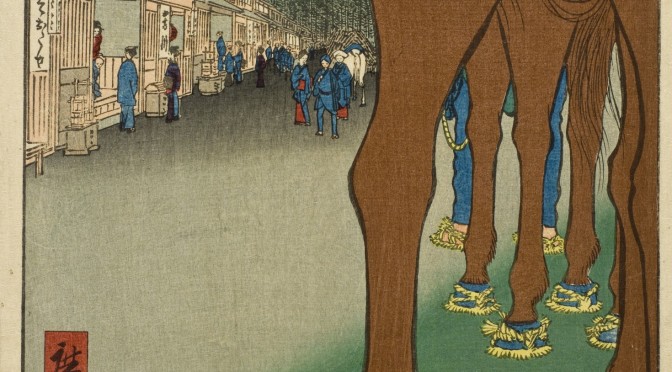 Mieko stood calmly and bowed to us.

From a small curtain at the end of the hall opposite the kitchen, we heard a whimper. Aimaru sprinted toward it, his battered knife still in his hand. With a yell, he yanked down the curtain, and revealed the old innkeepers, huddled on the floor of their small room.

After a moment of shocked silence, Aimaru bowed to them. “Pardon me for intruding,” he said, as if he had merely turned in at the wrong door.

The old couple seemed barely to recognize that he was there.

We all stumbled out of the dining hall into the corridor. Two more Imagawa soldiers lay dead there, and the elder Little Brother was standing impassive above them. Emi and I started to run toward the front door to see who our rescuers might have been, but Lady Chiyome called out sharply, “Stay here, young idiots! We don’t know who those horsemen are!”

Shamed, we shrunk back toward the back of the corridor, stopping just shy of the dead soldiers who had been piled at the bottom of the staircase.

The two Little Brothers lumbered up toward the front of the hall, blades at the ready. The door was hanging from a single hinge, and a shard of sunlight thrust against the corridor wall. The younger Little Brother, his head still bleeding, crept up to the door and peeked through.

I gasped at that: that our saviors should be the force that had been the nightmare of my father’s warrior career, and the enemy of his second patron, once he became a scribe. What have I gotten into? I wondered.

With Lady Chiyome herding us from behind, we all began to make our way toward the exit. I was more than a little terrified. Father had said that the Takeda cavalry were the wind, a mighty tempest that swept away everything in its path. Toumi pushed at my back, or I would have been frozen to the spot.

When we were all in place, the elder Little Brother reached out to open the door, but before he could, the remaining hinge pulled out of the wall with a squeal, and the door slammed to the floor.

I let out a yelp, but then pulled my mouth shut, so that the teeth clicked.

A cold, nightmarish scene met us in the warm light of the new morning. In front of the stable, three Imagawa soldiers lay motionless on the ground in their own gore. In their midst lay the still form of Kuniko, her blood-streaked glaive still clutched in one hand. A sword was planted in her chest. Mieko and the two Little Brothers ran to her.

At the entrance to the inn’s yard, four cavalrymen sat gleaming on their black stallions. Each had a red flag on his back bearing a four-diamond insignia. The Takeda.

The foremost of the samurai, whose helmet was decorated with antlers, leapt from his horse and strode fiercely toward us.

Aimaru lifted his battered blade, but Chiyome-sama shouted again, “Put that down, boy. You’ll get hurt.”

The Takeda samurai knelt directly in front of Lady Chiyome and bowed deeply. “Chiyome-sama,” he said, his voice respectfully low, “it is an honor to see you again. We were sent to find you. I didn’t expect it to be so easy.”

The old woman looked amused at his show of respect. “Easy indeed, Lieutenant Masugu. I had been told the Takeda army would be leaving Serenity Province to Lord Matsudaira’s troops.” She arched an eyebrow. “Who are, I believe, attacking from the other side of the province.”

The samurai removed his helmet, revealing a sweat-stained cap and a sharp, wry face. He looked around at all of us. “The Imagawa seem finally to have realized that they were stuck between a pair of jaws, and they’ve started wriggling quite a bit.” He gestured to the dead men on the ground. “They attacked our camp last night. When we scattered their charge, they ran back here, more interested in looting their own villages than defending their province.”

Lady Chiyome looked down at the corpses with a look of utter contempt. “Ruffians,” she said, and her tone made it clear that this was the lowest term she could have used.

Then she glanced over toward the stable door. Mieko sat, still cradling stony-faced Kuniko’s head in her lap; she was not crying, but her face was blank with grief. The larger of the Younger Brothers shook his head, and Lady Chiyome gave something halfway between a grunt and a sigh.

Staring at the tableau, Lieutenant Masugu’s mouth opened and closed. “Poor… I’m sorry.” He turned back to Chiyome. “She… died well.”

What had Kuniko been doing out there? What had she been doing arming herself with the long glaive? Fighting well, clearly. Dying well.

Masugu gave an embarrassed wince and looked around at all of us. His eyes lit on Aimaru, Emi, Toumi and me standing there, still dressed for bed. “What are these?” he asked, a look of curiosity sharpening his frank gaze. “New shrine maidens?”

“Of course, Masugu,” said Chiyome-sama. “The gods must be honored even in such times as these.”

Chiyome-sama got a sly look on her face. “Lieutenant Masugu, let me introduce three young samurai maidens: Tarugu Toumi, Hanichi Emi, and Kano Murasaki.” A little confused to hear my rank and formal name, I bowed politely, if stiffly. I could see the others do the same to my left.

“Kano…?” Masugu looked at us as if he were trying to think where he’d met us before. Then his brows sprang up, and he gave a sharp whistle of surprise. “Quite a pack!” he said. Then he jerked his thumb toward Aimaru. “Who’s he? Go-Daigo’s heir, come to life again?”

Lady Chiyome gave her thin smile. “No, he’s just a spare.” She glanced over toward Mieko continued to rock Kuniko’s head in her lap, while the two Little Brothers stood, looking impassive as statues. “Much needed spare, it seems,” she sighed.

The Takeda samurai rubbed the top of his head through the cap, and looked around at us. “Chiyome-sama,” he said, “we’ve come from the Mountain to bring you and your, um, cargo back to Mochizuki. Would you do us the honor of allowing us to escort you out of the battle zone?”

Lady Chiyome peered around at the scene, her acid gaze washing over the inn, now even more sad than it had been the day before, and our company, none of us even dressed for the day yet. “We will leave as soon as I am changed and packed,” she proclaimed. Then she strode back toward the inn and her room. Mieko fell in silently behind her, and we all prepared to leave.

As quickly as our hands and feet could manage it, we were back in the courtyard. Lieutenant Masugu’s troops now flooded out the inn-yard gate, an ocean of them, all on sleek black stallions, all with red Takeda flags on their backs. The horses’ steaming breath was a glowing fog in the now-bright morning light.

The Imagawa corpses were all piled to one side of the courtyard.

In front of them, on a rough wooden platform, Kuniko’s body lay wrapped in a dirty white shroud.

It felt odd. I had barely met the woman, had only known her for a day. I hadn’t liked her very much. And yet I mourned her death far more than those of the pile of dead soldiers.

Lady Chiyome stood before the old couple that owned the inn. She handed the woman a small, heavy bag. “Let the proper rites be said for my woman.” Then she looked to the broken door and sniffed. “And use what is left—what is left, mind you—to clean this place up.”

The old couple muttered their thanks and promises, and touched their grey heads to the dirt.

Let us know what you think in the comments below!

Want to read the whole book, help make the book even better by giving the author your feedback, and earn a gift card good at Amazon or iTunes? Sign up to be part of the Risuko Beta Team!

One thought on “Risuko — Chapter 7: Wind”