Waiting for next Seasons of the Sword book? Author David Kudler just shared this sneak preview from the next exciting installment in Risuko’s adventures:

I love to climb. 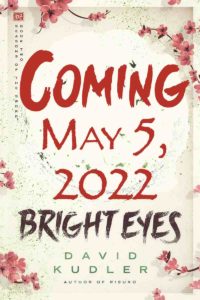 suppose that’s a silly thing for me to say, at this point. Of course I love to climb. Still—it’s true. It’s always been true. That earliest memory—of my mother weeping with my sister in her arms: I see it from above. Even though we had just moved into the tiny house, even though I was just four years old, I had already found my way up into the rickety rafters. I had always felt more at home up in the air than on the ground. Safer.

There was a reason that my mother came to call me Squirrel.

Yet as I stared at that sheer rock face from within the confines of the Full Moon, I must admit that I was nervous. Afraid.

Toumi snorted as she and Emi shouldered past me, bows and quivers over their shoulders. “Scared, Mouse-chan?”

I shook my head. But we both knew it wasn’t true.

Emi smiled as they walked out the gate. I think she meant it as reassurance. It felt as if she were consoling me: It’s been nice knowing you, Murasaki.

“Come along, Risuko-chan,” said Mitsuke. “Lady Chiyome tells us you climbed up the side of the great hall to her window on a snowy night. If you can do that, this should be no problem.”

We walked through the rear gate and the cliff loomed over us.

“Has anyone else ever climbed it?”

The kunoichi with the forgettable face shrugged. “You’ll have to ask Mieko. She’s been here longer than I have.”

Again I nodded, though my mouth was dry. “Let me… find the best line up.”

She held her hands out, palms up, as if to say, Don’t let me stop you.

Mouth parched, heart in my throat, I crossed the small kitchen garden that lay behind the rear wall of the compound and clambered over the bush-choked pile of rubble at the cliff’s base, staring up at the rock.

Closer up, the face no longer looked sheer. It was steep, it is true, but not straight up and down, and there were cracks and fissures where I could see my toes and fingers finding purchase.

Just to the right of the center of the precipice there was a slight crease. An indentation no more than a hand’s breadth or two deep that ran at least two-thirds of the way up the cliff to an angled shelf. It had been invisible from a distance, but close up, I knew.

Feeling breath and strength return, I approached the wall and began to climb.

I know that, as long as I can find them, I can keep climbing.

And this little fissure in the cliff’s face made finding those easy. It was full of cracks and irregularities that I could wedge a foot or hand into. The concavity in the rock and the slight angle of the incline meant that my weight wasn’t solely on my fingers and toes. I won’t say that it was a climb that anyone could have done. I won’t say that it was easy. But quickly I was free of the ground and back up in my element.

I felt as if the rocks were there entirely to help me climb, as if the mountain itself were aiding my ascent.

Here’s another secret: I often feel that way. Not always. But there are times—my favorite climbs—when it doesn’t feel as if I’m climbing, but as if the cliff or tree or wall were lifting me, higher and higher.

I have never been one to feel the presence of gods and monsters. Yet in those moments I know with all certainty that I am in the presence of something much, much larger than myself. I feel both humbled and alive.

You may think me silly or peculiar; my sister always did.

When I reached the shelf, I was almost disappointed. My muscles were warm, but it was a good feeling; I had not yet begun to tire. Still. It would be good to pull myself up onto the ledge and find my best starting point for the rest of the climb.

I clambered up onto the relatively flat surface and sat. For the first time, it occurred to me to look down.

Below me, I could see Mitsuke, Mai, and Shino, their faces upturned, their mouths open. Over by the walls of the Full Moon stood a handful of Matsudaira samurai, as well the black silhouettes of the old Portuguese priest and the boy, Jolalo-san. They too seemed to be staring up at me.

Grinning, I waved to them all.

Of course, at just that moment it began to rain.

Weather comes quickly up there in the mountains, especially in the warm months. Blue sky can give way to storm in the blink of an eye. Blizzard can change to rain just as quickly.

Fat drops began to splash off of the dusty rocky and to cool my pleasantly warm neck. Suddenly, the sun disappeared and the sky darkened as clouds poured over the mountain above me.

I looked around for what shelter I could find. I didn’t expect much.

The shelf wasn’t level. Water was already beginning to trickle down. I stood before it soaked my trousers. Up toward the upper end of the ledge, where it narrowed away to nothing, I saw a dark crevice.

Thinking I might be able to shove myself at least partially out of the rain, I shuffled up toward the shadow.

The rain turned to hail, springtime as it was. Icy pellets pelted my head.

The crevice looked wide enough that I would be able to huddle out of the weather. I turned sideways and pushed…

And suddenly found myself through, and completely out of the hail.

Relieved, I watched the pea-sized hailstones bouncing off of the stone shelf.

Shaking myself, I looked behind me. It was completely dark. I reached out with my hands; there was open space. Rock walls widened out on either side, but I couldn’t feel a back wall.

I’d never been in a cave. As I’ve said, I have always been most comfortable above the ground, not beneath it.

Yet I could not help but feel a tickle of curiosity urging me deeper.

I took a step into the dark, and then two more. The air was cool and still and smelled… of something. Birds. Something.

I turned back to the opening. It was a vertical slash of bright light. Hail still bounced off of the ledge and into the cave, scattering at my feet.

I squinted into the depths of the cave, trying to peer into the gloom.

One of Mieko-sensei’s lessons came back to me. When moving from the light into the dark, she had told us one afternoon as we practiced stabbing the dummy blind-folded, keep one eye closed — both if you can safely manage it. That way, you will not be left blind in the darkness.

I knelt and closed both eyes, letting light seep away. I counted ten breaths, and then ten more. I listened to the tic-tic-tic of the hail behind me.

I opened my eyes.

Though the cave was still dim, I could see that it opened out from the narrow opening—as wide at the widest spot as our dormitory down below, though not as high.

In the dim recesses of the cave, against a night-black opening, crouched a creature of nightmares. Atop massive body that was pressed low to the cave floor, a lumpen head threatened, with enormous fangs and tusks thrusting out of a cruel, black-splashed mouth. Its eyes were lost in shadow, but I had no doubt that they were focussed on me, the invader.

The hair on the backs of my arms, on my neck rose. My breath caught, and I had to fight the urge to run screaming out of the cave. Never turn your back on an ogre. Oba–san had said it as a joke, but I know that he’d meant it nonetheless.

Barely daring to breathe, I inched my way backward.

The thing’s eyes remained locked on me, but it made no sign of following.

My foot bumped up against the wall. Light spilled onto my hands from behind me. Without blinking I edged my way back out of the cave and onto the wet, welcome ledge outside.

Still there was no sound of the monster pursuing me.

I edged my way back down to the far end of the shelf and turned to find my bearings again. The rain had lessened; across the valley it was sunny. And down below, on the road up to the ridge where the Full Moon and the Matsudaira camp perched, a swarm of soldiers were making their way up the hill.

Not blue flags this time. Red, with a four diamond emblem that I knew well.

Did you enjoy this preview of Bright Eyes? Check out these other excerpts:

Let me know what you think! — DK

What do you think? Want to read more? Sign up now!

Also, you’ve got until Friday, January 27 (noon Pacific) to help David fill out his ballot for this year’s SAG Awards!

No, that isn’t the final cover for Bright Eyes up there. it’s just a mockup we’re using until the designer is ready to share. We’ll ask you to vote, we promise!

Also, yes: David has been a member of Screen Actors Guild for over twenty-five years. But he still needs help voting!

One thought on “Bright Eyes sneak peek: The Cave”

It is easy to invest in the characters, and once the reader starts this book, it’s almost impossible to put it down. Risuko goes through a lot of character growth throughout the book. An entertaining story with excellent writing and haunting descriptions, a relatable heroine, and fast-paced writing.