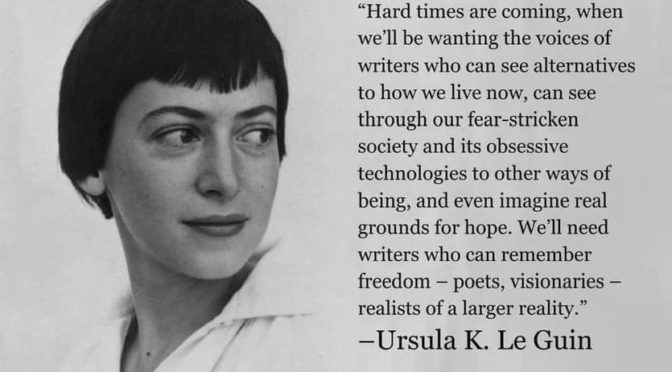 As an author of young adult books, I’ve been asked many times about the authors who had the greatest impact on me. I’ll often start by mentioning Maurice Sendak, which people assume is a joke, but isn’t.

I first encountered her writing when I was around 12 years old when I stumbled across A Wizard of Earthsea, her masterpiece of YA epic fantasy. The book set my imagination aflame in a way that few books have ever done. Its hero journey story of a young man who discovers that he’s a wizard, goes off to study magic, makes friends, and is forced to face the dark shadow of his archenemy absorbed me the way that the Harry Potter books (which came out 30 years later) would absorb my daughters. I devoured the (then) two sequels and, as they came out over the decades, the final three books that make up the Tales of Earthsea.

Here’s Le Guin reading excerpts from the first book c. 2008 (and answering some questions) which will give you a taste of why I was so entranced:

Three years later, when I was about fifteen, I encountered yet another Le Guin masterpiece, and it once again blew my mind. This was The Left Hand of Darkness, part of her science fiction Hainish Cycle. Where my first experience of Le Guin had been beautifully written, ambitious, but ultimately familiar epic fantasy, The Left Hand of Darkness was a book that used the trappings of science fiction to explode a concept that I (like most people of the time) so took for granted that we didn’t even realize that it was there: that of human gender as a fixed reality.

There are a lot of science fiction novels that deserve the title “great” — but The Left Hand of Darkness (in my opinion) stands without a doubt as the greatest.

Why? Because Le Guin uses all of the tropes that make science fiction what it is — space travel, other worlds, (semi-)alien species, advanced technology — to tell a story that deconstructs something so fundamentally human that most of us don’t even think about it much: gender. She thrusts a perfectly normal, standard-issue human male into a world where permanent sexual dimorphism is considered fundamentally deviant, has him fall in love with one of the gender-fluid locals, and then sends us on a wild sleigh-ride of an adventure where we are forced to question all of our assumptions about the innateness of our concepts of male and female.

It blew my mind when I read it at age 15 (about 8 years after it was published). It’s blown my mind in different ways every time I’ve reread it since.

I was talking with someone recently about where I thought Le Guin stood as a fantasy author compared to JRR Tolkien and George RR Martin (this person’s favorite fantasy writers). I answered that I think Le Guin, like Tolkien, stands as a true innovator in both that genre and in science fiction. Martin is a very good, influential writer, but Le Guin and Tolkien are on another level.

I’ll admit here that I haven’t read all of GRRM’s work. Having granted that, I will say that what lifts Tolkien and Le Guin into a different sphere for me is their ability to think the ramifications of their world building all the way through.

Tolkien spent a lifetime thinking the Legendarium of Middle Earth through with a scholar’s knowledge and attention to detail.

Le Guin — child of two anthropologists — approached both her fantasy and science fiction by asking deep, thoughtful questions (Left Hand of Darkness: What would the human race be like without gender? The Lathe of Heaven: What would happen if a machine could actually make dreams come true? The Tales of Earthsea: What would happen if the land of the dead was an actual place we could visit and return from?) and she kept asking them, even as she was writing. Like good science, her books constantly re-examine their assumptions and force the reader to reconsider what’s actually going on. Like good art, they pull you in and sweep you along.

Tolkien, Martin, and Le Guin all tell gripping, well-crafted stories with fascinating characters. But where Martin’s stories are about, well, the stories, and Tolkien’s are ultimately about the incredibly rich world in which his stories are set, Le Guin uses the possibilities inherent in writing speculative fiction to ask fundamental questions about what it means to be alive.

Also, I happen to like Le Guin’s spare prose style best, but I’ll grant that that’s a matter of personal preference.

She inspired me as a reader and as a writer — but also as a person.

Here’s an example of that, from her speech while receiving a National Book Award in 2014 (the source of the quote in the meme at the top of this piece):

Risuko is written in a language that sings, capturing the reader from the first moment you open the page. The book draws you in and grips you, refusing to let go until those final few paragraphs. I blasted through Risuko’s two hundred and thirty-six pages in a mere four days, and can’t wait for the next installment.