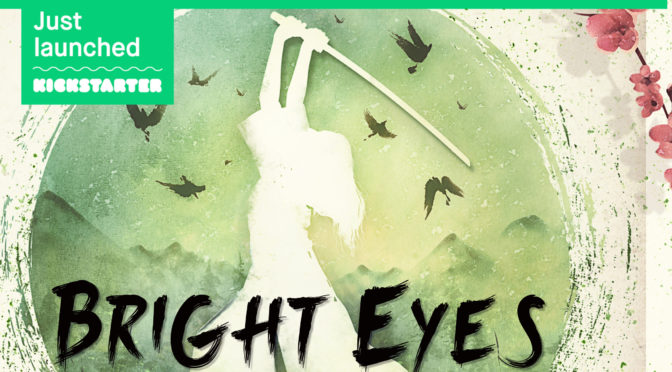 We’re excited to announce that the Kickstarter campaign to support the launch of Bright Eyes: A Kunoichi Tale, is now open — and already halfway to its initial goal!

About the Kickstarter Campaign

This crowdfunding campaign, which runs through April 10, will help us create the best possible book — while guaranteeing our supporters copies at less than the retail cost.

Thank you so much for supporting Bright Eyes!

It’s true. Publishing isn’t cheap. While Bright Eyes is nearly finished, I need your help to make the book a reality and to help it find its audience.

Reaching the funding goal will help create an attractive, exciting, historically and culturally accurate thrill-ride of a teen book.

Some of those are not very exciting in and of themselves, but they’re all essential if we’re going to release the best possible book.

Should we surpass the goal, there are a number of would’t-it-be-nice options that we’ll be able to go for, from presenting the book at cons and festivals to marketing directly to libraries and schools to creating braille and/or large-print editions for the vision-impaired to finding translators for foreign language editions. When we get there, I’ll start announcing some stretch goals. 🙂

Can one girl stop a killer?

The future of Japan hangs in the balance, and it’s up to a girl who likes to climb to save the day

Two armies have descended on the Full Moon, and the war that has torn Japan apart for over a century threatens to destroy Lady Chiyome’s school for young shrine maidens (and assassins).

In this thrilling sequel to Risuko: A Kunoichi Tale, Risuko must face warlords, samurai, angry cooks, a monster in the hills, the truth about her father, a spy among the kunoichi…

Someone kills a Takeda lieutenant, staging it to look like suicide. Can Risuko figure out who would do such thing?

And can she keep it from happening again?

I enjoyed Risuko very much. The prose is very vivid, the culture and Japanese language blended in as smoothly as supernatural elements in a well-written fantasy. Risuko is caught between trying to function in a war torn world, and daring to dream about making a difference.